Is it Spring Yet?

Well, the ticks will be out and we need to be informed.

Another great article by the AKC and lymedisease.org

Lyme disease in dogs, also known as Lyme borreliosis, is a bacterial illness that can be transmitted to humans, dogs, and other animals by certain species of ticks. It is caused by the spiral-shaped bacterium Borrelia burgdorferi that is carried inside the tick and then gets into the dog’s or person’s bloodstream through a tick bite. Once in the bloodstream, the bacteria can travel to different parts of the body and cause problems in specific organs or locations, such as joints, as well as overall illness. The ticks that carry Lyme disease are especially likely to be found in tall grasses, thick brush, marshes, and woods—waiting to grab onto your dog when he passes by. A tick can transmit the disease once it has been attached to the dog for 24 to 48 hours.

First named when a number of cases occurred in Lyme, Connecticut, in 1975, the disease can be hard to detect and can cause serious, ongoing health problems in both dogs and people.

Although Lyme disease can occur nearly anywhere in the U.S., infection risk is low in some regions and high in others. The areas of highest occurrence are the Northeast, the Upper Midwest, and the Pacific coast.

If Lyme disease is not diagnosed and treated early, it may become late-stage or chronic. This may also occur when early treatment is inadequate. While some symptoms of chronic or late stage Lyme disease are similar to those of early Lyme, as the graphic below shows, there are important differences.

In order for the Centers for Disease Control (CDC) to recognize a Lyme case for surveillance purposes, there must be “objective” findings, such as positive blood tests, Bell’s palsy or joint swelling (even though Lyme blood tests are unreliable and the CDC’s accepted “objective” indicators are not common). www.lymedisease.org

Articles
Back to top

Our service area encompasses approximately a 15-18 mile radius of Wycombe / Wrightstown, PA, as shown below. 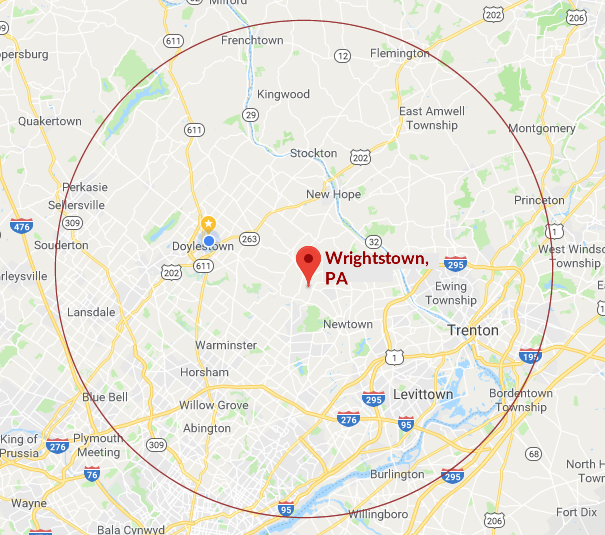